U.S. Rep. Brian Babin (R-Texas) today introduced the NSSF-supported Alternative Ammunition Manufacturing Act (H.R. 3802) to help ensure ammunition manufactures gain the certainty needed to produce alternative types of ammo. The measure requires the Bureau of Alcohol, Tobacco, Firearms and Explosives (ATF) to issue a ruling within 60 days of receiving a waiver application, or else the application will be automatically granted.

"Over the past three and a half years, the ATF has failed to respond in a reasonable and timely manner to requests from ammunition manufacturers who are seeking waivers to produce alternative rifle ammunition for the hunting market made with brass instead of lead or copper," said Babin. "This has created considerable uncertainty for ammunition manufacturers and gun owners alike. Manufacturers looking to comply with the law and produce alternative types of ammunition should not be given the silent treatment by the ATF. Our legislation will hold the ATF accountable for their inaction by requiring a timely and detailed response to all waiver requests."

"This legislation will allow ammunition manufacturers to more quickly bring to market alternative hunting ammunition products to serve consumers in markets like California where traditional ammunition is banned for hunting and for those hunters who prefer to use alternative products," said Lawrence Keane, NSSF Senior Vice President and General Counsel of the National Shootings Sports Foundation.

H.R. 3802 is also endorsed by the National Rifle Association (NRA), and Gun Owners of America (GOA).

Several Republican members of the U.S. Senate this week came out in support of NSSF-supported legislation introduced this summer by Sen. John Cornyn (R-Texas) to provide financial incentives help ensure that the states send all adjudicated mental health records to the National Instant Criminal Background Check System (NICS). The federal legislation serves to complement the work NSSF has been doing in the state legislatures since 2013 to remove impediments to such submissions, as well as for all other applicable criminal records.

Under federal law, individuals who have been involuntarily committed to mental institutions or otherwise found to be incompetent cannot possess a firearm for life. Voluntary commitments are exempt and the right to purchase and possess a firearm can be reinstated by a court. S. 2002 would not expand the definition of mentally incompetent.

U.S. Sen. James E. Risch (R-Idaho), a member of the Senate Foreign Relations Committee, this week added his voice to the growing list of Members of Congress urging the Obama administration to complete implementation of its Export Control Reform (ECR) Initiative. While other industries are now benefitting from this initiative to streamline the process and make American companies more competitive in the global marketplace, the firearms and ammunition industry "remains on the sidelines," Risch wrote in a letter to Secretary of State John Kerry and Secretary of Commerce Penny Pritzker. NSSF is continuing to work to advance ECR on behalf of the industry. 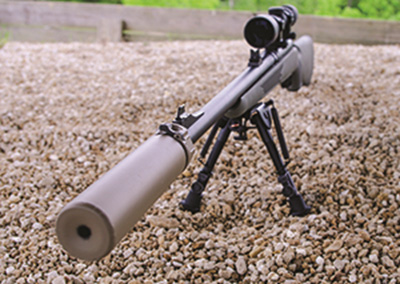 U.S. Rep. Matt Salmon (R-Ariz.) has introduced a bill to remove firearm suppressors from the National Firearms Act (NFA). Known as the "Hearing Protection Act of 2015," this legislation would do away with the burdensome process, paperwork, and fee required by federal law before someone is allowed to legally acquire a suppressor. Suppressors have become more common throughout the country with nearly 800,000 suppressors in circulation today mainly due to the fact that more states have enacted laws legalizing their ownership, possession, and use for hunting. Currently, 41 states allow for the ownership and use of suppressors, while 37 states allow suppressors to be used for all lawful hunting. For information regarding suppressors, please see NSSF's suppressor fact sheet and suppressor map.

A New Hampshire House committee gave its approval last week to HB 500, which would repeal current prohibitions on using suppressors (or silencers as the law states) for hunting. If HB 500 is approved and enacted, New Hampshire would become the 38th state to legalize the use of suppressors for hunting. Earlier this year, Montana legalized all hunting with suppressors, along with Minnesota, and Maine. To see where your state stands on suppressor ownership, possession, and use for hunting, see NSSF's Suppressor Laws by State map.

The Second Circuit Court of Appeals this week unanimously upheld core provisions of New York and Connecticut laws passed after the Sandy Hook tragedy. The court found that although the laws are "broad and burdensome," they did not infringe upon the Second Amendment because only a "type" of firearms `” semi-automatic rifles `” and magazines with a capacity of more than ten rounds are banned.

The court also reversed a New York district court ruling that had found New York's usage of the words "muzzle break" [sic] and "version" to be unconstitutionally void for vagueness because their meaning was apparent within the context of the legislation. The court did find Connecticut's prohibition of the Remington 7615 to be a Second Amendment infringement although allows the possibility Connecticut could produce additional evidence to support prohibiting the firearm. Finally, New York's seven round load limit in a ten-round capacity magazine was struck down after the state failed to convince the court this limit would have any sway over criminals. An appeal to the U.S. Supreme Court from this ruling has been promised by Second Amendment groups. 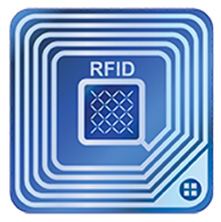 The ongoing issue of so-called "smart guns,' or what we would call firearms with authorized user technology, will be getting more attention soon if what the Washington Post reported this week comes to pass. New Jersey Senate Majority Leader Loretta Weinberg, the author of the still-unenforced state statute mandating that all firearms sold in her state be "smart guns" if they become available anywhere in the American marketplace, is said to be leading the move to repeal. Again, for the record, the firearms industry does not oppose the development or marketing of this technology. We are, however, opposed to mandating by any level of government. Consumers should decide whether they want to purchase this type of firearms. NSSF will monitor and report on developments.

The Maine secretary of state this week gave permission for the Michael Bloomberg-funded Moms Demand Action to begin signature collection for a 2016 ballot referendum to expand background checks to cover most private firearms transfers. The same process is under way in Nevada following the 2014 passage of a nearly identical ballot initiative in Washington State. The Maine initiative must gather some 61,000 valid signatures by Jan. 22, 2016 to qualify for next November's ballot. Maine voters defeated referendum measure in 2004 and 2014 to limit bear hunting practices in the Pine Tree State. Read the Guns.com account.

The Missoula, Mont. City Council's Public Health and Safety Committee this week held a public hearing on a proposed ordinance to require background checks on private firearms transfers made within city limits. Not surprisingly, there was a lively exchange of views. Among points raised was the possibility of exempting concealed carry permit holders from having to undergo such a check as well as the proposed definition of an antique firearm. The council committee is expected to take up the proposed ordinance again next week. "It's going to be a long process," said once council member. Read a local news account. 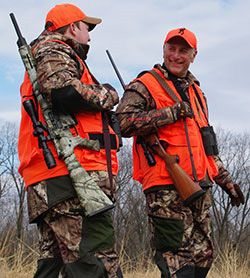 Texas Gov. Greg Abbott is urging his state's residents to vote "yes" on Proposition 6, the statewide Constitutional Amendment ballot question to protect their rights to hunt and fish. Early voting is under way through Oct. 30. "Texans have long lived off the bounty of the land and we know how to conserve our natural resources for future generations. It's so incredibly important that we protect our connection with the land. We need to act now so no special-interest group can come in and try to strip away your rights," Abbott wrote in a Texas newspaper op-ed. NSSF also urges support for the ballot measure.

According to a report from the Congressional Sportsmen's Foundation with data from NSSF and the American Sportfishing Association, the Lone Star State's 1.1 million hunters and 2.2 million anglers spend $4.1 billion annually and support 65,993 jobs. Hunting and fishing are deeply rooted in Texas culture and together have a major economic impact on the state. The language on the ballot for Proposition 6 will read: "The constitutional amendment recognizing the right of the people to hunt, fish, and harvest wildlife subject to laws that promote wildlife conservation." For the full text of the proposed constitutional amendment as approved by the legislature, click here.

The Los Angeles City Council's Public Safety Committee on a 3-1 vote this week advanced a proposed ordinance to mandate handguns not in use be locked in a secure container under threat of a $1,000 fine. NSSF opposes the ordinance and submitted a letter to the committee in July pointing out that The U.S. Supreme Court in the Heller case struck down such storage requirements as being unconstitutional. Both this measure and one to exempt retired police officers from the city's newly-enacted ban on ammunition magazines holding more than 10-rounds will go before the full council for consideration in coming weeks. NSSF will keep you informed of developments. Read a news account.

ATF will be conducting an Open Data Showcase Nov. 3-5 at its headquarters in Washington to acquaint the industry with the multitude of ATF related data that is available. Pre-registration is required by Oct. 27. The Showcase will include six separate sessions with each focusing on a specific dataset including the Annual Firearms and Manufacturing and Export Report (AFMER), Firearms Commerce data, Federal Firearms Licensees (FFL) data, National Firearms Act (NFA) data, FireTOSSand Trace data. Questions or comments can be sent directly to ATFOpenData@ATF.gov.

Are you ready for the new NICS?

Federally licensed Firearms retailers that have not yet registered for NICS E-Check are being advised to do so prior to the New NICS coming on line in January 2016, at which time a large number of new FFL registrants are expected. Visit the NICS FFL website for more information.

#GUNVOTE Re-Loads Often with News of Interest to You

To help gun owners to register to vote and evaluate candidates' positions on Second Amendment and sportsmen's issues, NSSF provides #GUNVOTE, our voter education site, which we update several times a week with news of interest. Recently, we posted our first video of the 2016 campaign season, which has proven very popular.

Voting in the 2016 election is a process that culminates in going to your polling place. It begins by making sure to register, then becoming educated about the candidates running for office and discussing choices with family and friends so that they understand the importance of voting to protect America's firearms freedoms and the lawful commerce in firearms. So #GUNVOTE early and #GUNVOTE often.

Signing Up for NSSF PAC Made Easier for Member Companies

Now, signing up for NSSF PAC has never been easier. Just click the link below, fill out the form, add contacts (or email us list of names) and hit submit! What are you waiting for? Help ensure our industry is heard as we approach the crucial 2016 election year. Sign up today! Online PAC Prior Consent Form.

Thank You to Our Latest NSSF PAC Contributors