ERGONOMICS OF THE MODERN PISTOL

You just picked up a brand new Glock 17, and of course without hesitation, want to test out your new "Purchase", immediately heading to the shooting range where you meet up with a good friend of yours, who brings his Colt 1911. After a few shooting warm-up drills, you each decide to try out the other's firearm. The very first thing you notice is how different they feel from the other in your hand, due to the differences in grip angle. So why exactly are these pistol grips so very different, and which is the correct one? This question is actually older than you might think, and believe it or not, both grip angles are correct…

At the turn of the 20th century, there was a native German-Arms designer by the name of George Luger, known for creating a new, innovative semi-automatic pistol, and eventually a new cartridge to go along with it; the 9x19mm. The pistol bares his own name (Luger) and is now one of the most widely recognized firearms in the world. Luger's unique approach to the semi-automatic pistol design, involved a folding bar that protruded upward from the slide, and upon the firing of the weapon, would perform the extracting, ejecting, and feeding of a new cartridge. Luger's design meant that the pistol grip was angled to accommodate the upward weight shift of the folding bar, which allowed for a more instinctive "point" style of shooting. Simply, this evolved sidearm means if you were to point your finger at the intended target, the barrel would fall in line with the direction of your finger.

John Browning and the 1911 Pistol 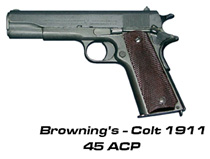 The grip angle on the 1911 platform originates from research that Gun-Innovator John "Moses" Browning conducted in designing, essentially mastering a new platform. Prior to the introduction of the 1911 pistol, most handguns were revolvers and the few semi-automatics that existed at the time, were predominantly located in Europe (i.e. the Luger). Browning improved on the early semi-automatic designs, by designing a two (2) piece weapon (frame and slide) with the top portion sliding back and forth to load and eject the ammunition. In addition, Browning needed to find an angle that would conform to shooting the semi-automatic pistol comfortably, and provide a solution for easier management.

Two (2) key factors that evolved from that research were a "Spur" or "Beaver Tail" that extends from the top of the rearmost portion of the grip, and the angle of the grip itself. The "Beavertail" aligned the shooter's hand higher on the grip, enabling greater control, while keeping it clear of the slide's movement. The angle that proved to be the greatest asset to the shooter, is relatively the same angle that a human wrist locks into when handling force similar in relation to a punch. This same research transpired to the grip angle that is now used on many other modern instruments like, power drills, saws, and other similar tools, where force is being applied from the wrist. With its introduction, the 1911's simplified design proved to be slightly more mechanically reliable, than the upward folding bar seen on the Luger.

Many pistol designs that have followed Browning's 1911 progression in the last century, still implement the same grip angle to help the wrist of the firing hand adopt a natural posture when firing the weapon. Even after the introduction of "double-stack" magazines (another John Browning invention, first introduced on the Browning Hi-Power), the grips on the weapon were wider to accommodate the larger magazines, but the angle of the grip didn't change a bit. The design that was utilized with this angle, encouraged comfort and stability for the shooter's wrist which equates to a more enjoyable experience for those long days at the range.

Even in today's world of space-age composites and alloys, pistol grips still employ one of these two (2) major designs. The grip is either angled to put the shooting wrist in a posture as if you were going to punch something, aligned for shooter comfort, or angled to enable the shooter to point at the target with the index finger, and align the muzzle as close to the target as possible.

So which is better?

The simple answer is the one you find the most comfortable and natural. If you select a weapon that is angled for comfort, and desire to learn to shoot more instinctively, then consider "punching" the target, as this will help you to instinctively line up your barrel on target. If you decide on a grip angle that allows for a "point" (point a finger) style of alignment, extending the wrist forward into the pistol will ensure the felt recoil is still comfortable to your wrist. Either method of shooting is relatively easy for even novice shooters to adapt to functional use.

Relatively, the best methodology for the modern educated shooter to adopt, is ensuring both comfort with the firearm as well as constantly, and equally important, consistently training to both gain and keep proficiency with the firearm.

Most important of all, never stop learning!