Sometimes, and more often than not, it just really seems that the favorite pastime of mankind is strife. If one were to turn on any source of main-stream news right now, they would be inundated with images and news of dastardly events going on throughout the world. Whether protesting riots the latest hot-button topic of the week, bombings in Europe, open-warfare in the Middle-East, or hostage taking and kidnappings, terrorism seems to be on the rise as we collectively march toward mankind's ultimate end. The one factor that all of these events have in common, is that they produce a number of casualties.

Even before the "Trojan Wars" described by HomerHome in the "Iliad", Commanders have tried to prevent casualties by ensuring that battlefield wounds are treated quickly and efficiently for one reason… to save the lives of their troops and conserve manpower. By the beginning of the first "World War I", each soldier regardless of allegiance, entered the field of battle carrying some form of bandage, or small first-aid kit as a standard part of their kit. Today, advancements in casualty management have led to the creation of small aid packs carried by every individual entering into areas where hostilities are taking place. These kits have become commonly referred to as "Individual (or Improved) First-Aid Kits" or the IFAK for short.

The term "IFAK" gets thrown around a lot in today's marketplace, so what exactly is an IFAK, what is in it, and why have Military personnel adopted it?

IFAKs were designed to allow the Armed Forces user's to self/ buddy-treat life threatening injuries that occur in modern conflicts / combat-situations, as they contain the items necessary to treat injuries both effectively and expediently. The key word here is "Individual". The IFAK is meant for use by the wearer and for the wearer alone, not the treatment of other casualties. This is why everyone in a Military Unit is wearing one. For a group, a first aid or "Trauma kit" is what is needed and strongly recommended. The IFAK is housed in a single pouch or bag that can usually be attached to the wearer or their equipment. The pouches that house the IFAK contents, are themselves designed to ensure easy access for the user to access the contents. An IFAK of a good and useful quality, will usually contain some variation of, a pressure dressing, a hemo-static agent (Quik-clot, Combat-Gauze etc.), tourniquet, chest seal, chest decompression needle, a role of surgical tape, surgical gauze and surgical gloves. 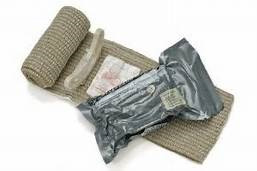 An Israeli (type) or Pressure Dressing is a bandage that has a long elastic wrap attached to the dressing. When applied correctly, it centers the sterile section directly over the wound, the strap wraps around in a way that applies direct pressure to the wound area, arresting blood loss. These items are included in IFAKs because of the many different possible wounds that may occur in areas, where a tourniquet would simply not be applicable to treat. If the bleeding isn't controlled with elevation and pressure, then another immediate option is needed.

Various forms of hemo-static (Quik-clot, Blood Stop) agents are often found within modern IFAKs. These materials help blood coagulate faster, sealing the wound faster and thoroughly. Often times, the hemo-static agents found in modern IFAKs are impregnated into other materials such as gauze, making it easier and more effective to apply. The benefit to these agents is that they can be applied to wounds almost anywhere on the body, and reduce blood loss, giving rescuers and first-responders a chance to get the casualty to a trauma management center within the "Golden Hour". 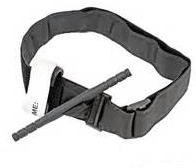 The Tourniquet has been around for centuries, but only in the last several years has become one of the most indispensable lifesaving pieces of equipment available. In simplest terms, a tourniquet is a constricting device placed around a limb and tightened, to restrict the flow of blood to the injured limb, preventing acute blood loss. Numerous Pentagon studies on casualty statistics, from both Iraq and Afghanistan, have proven to drastically reduce combat deaths related to exsanguination (bleeding to death) caused by extremity wounds. Modern tourniquets are designed to be applied quickly and efficiently with a single hand, which is crucial when one is applying it to their own limb. 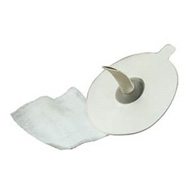 A good quality Chest seal (Asherman, Bolin, Hyfin), is a vital addition to an IFAK, as it is an expedient treatment for a sucking chest wound (SCW). An SCW occurs when the chest wall/ cavity and/or lungs are penetrated by a projectile (bullet or fragment) or other object, allowing air to move between the chest cavity and the outside environment. When the victim draws air in with each breath, it is drawn through the SCW into the chest cavity. This air accumulates in the pleural space (between the lung and its lining). When breathing out, some portion of that air can escape into the surrounding cavity and become trapped. Air drawn in through the point of an SCW can remain within the pleural space, and within a short period of time, it will begin to place pressure on the heart and lungs. This squeezing effect is incredibly dangerous as it results in a condition called a tension pneumothorax. This not only begins to decrease the victim's ability to effectively breathe, but also puts them in serious risk of dying.

Chest decompression needles are thus, another essential item to include in an IFAK, as they are the most effective way to treat a tension-pneumothorax.

Surgical Tape is a common item for many types of kits, even ones that aren't solely dedicated to first-aid. With adhesive that works on many different surfaces, especially human skin, it has a great tinsel strength that is useful for providing good stability. Surgical tape is easy to use, and can be cut or torn, allowing it to be applied quickly. It can also be used to close or cover small wounds when a dressing would be too large or ill-suited for use.

EMT Shears (NOT SURGICAL SHEARS) are another absolute necessity, because without access, the wound cannot be treated. They are also useful for cutting clothing or even just opening difficult plastic packaging. 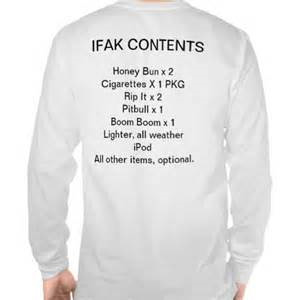 Surgical Gloves are another necessity, because you don't know what is lurking in people's blood or other bodily fluids, protect yo'self! No glove, no love!

While there are many versions of IFAKs, each having particular merits, they are for treating extremely serious wounds. Not boo boos. If minor cuts, scrapes, scratches, bruises occur on an outing, the IFAK is absolute over-kill, so bring some form of first-aid kit better suited for minor injuries. Though Military IFAKs were designed for conditions and injuries found on the modern battlefield, they continue to have many unnecessary items stuffed into them. So much so, that they have evolved into bloated monstrosities that include such superfluous items as sunscreen, chapstick, and even a rice-based magical hydrating elixir. In the Military, there is a common saying: "ounces = pounds, and pounds = Pain". In a world of ever creeping requirements, cramming essentially worthless items into a small space that is designated for life saving equipment is a horrible idea. 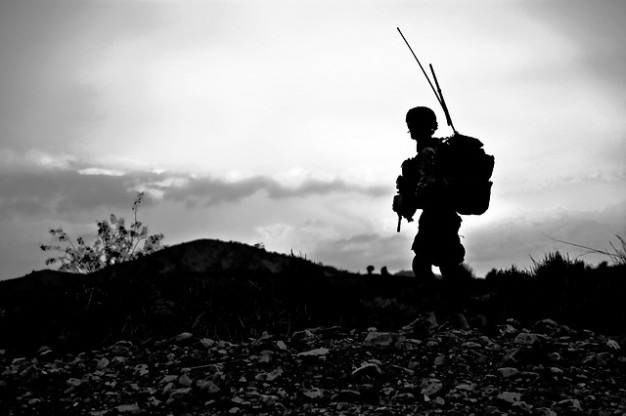